Our airworthy MIG 15 was originally produced for training flights in Aero Vodochody under the licence code CS-102. This legendary two-seated jet aircraft is equipped with the engine VK-1. Even today MIG-15 can surprise experts by its astonishing  features of flying. The aircraft is endowed with the Czech camouflage known under the name of 30th SBOLP, so-called  “ostravsky” with a characteristic sign on the forepart. It is based at the airport in Hradec Králové, where this particular MIG had flown until 1983 with the registration number 2514. 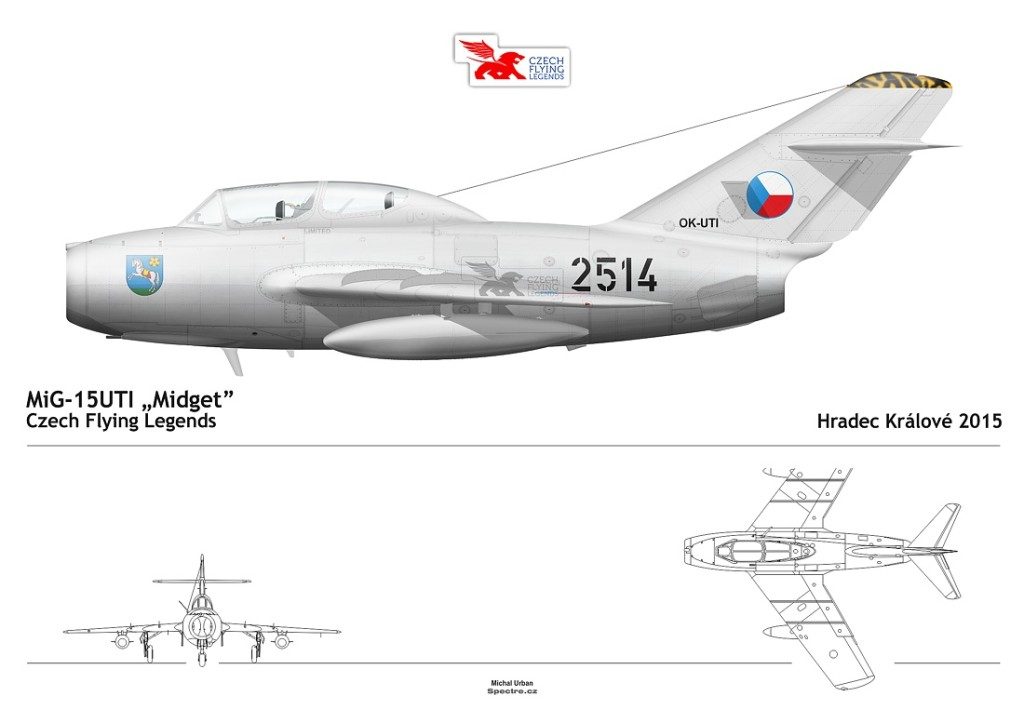 History of our aircraft:

MIG 15UTI with serial number 242266 was produced in Aero Vodochody under the licence code CS-102 in 1955. The aircraft was equipped with the RD-45 enging. The first test flight occurred at the same place on 22/4/1955 by two professional pilots Vlastimil David and Antonin Bartos. On 17/6/1955, shortly after the test flight, the aircraft was exported to Poland. It served the Polish air force at 61 LPSzB based in Biaia Podlaska as a training aircraft (under the licence code SB Lim 2 with registration 2266) until 22/11/1990. During its service many excellent pilots had a chance to sit in the cockpit of this legend including the first Polish astronaut MirosIaw Hermaszewski. Later on, the new type of engine called VK-1 replaced the old one. It was modernized in order to be high-performance. After completing military service, the aircraft was stored and eventually conserved.

In 1994, an American businessman, Tom Smith, bought this MIG 15 and arranged transport to California. The aircraft was registered under the licence N-41125 two years later. It has been newly based at the airport in Paso Robles CA ever since, so as to be presented to visitors of Estrella Warbird Museum of Paso Robles and at various air shows across the USA.

In 2013, the aircraft was purchased and brought by the company Czech Flying Legends to the Czech Republic. Many of us may see this positive transfer as a return of the legend back to the „Czech sky“. The MIG 15 has got a particular camouflage in Czech colours and carries the number 2514 on its body. Back then the same number was owned by MIG 15UTI from 30th SBOLP (Fighter bomber unit) operating in Hradec Králové until 1982. The former carries a characteristic sign of the city of Ostrava on its forepart, exactly as the original MIG did. There is only one difference between the two MIGs. Our MIG has „tiger“ colours on the upperpart of the tail to express the cooperation with NATO Tiger Association.